Since having the car converted to a Sebring track day toy in 2006 , I have been updating the engine year by year in a quest to have something a bit different. I love the V8 but every man and his dog has one of some discription.

So in 2011 after some issues with the webers I decided to go fuel injection, I understand a laptop and solinoids.

The triple Webers that were on the car caused were in my opinion responsible for at least one engine failure and damage to another including fires in a number of MGC triple weber conversions. Being away from home for long periods the Webers did not seem like lack of use. This time the engine had a problem with a valve seat so during the rebuild I decided to take the plunge and go injection. Seems I know a little more about a PC than I do webers. All work was carried out by Damico race engines in the UK who are fast becoming very familiar with the MGC engine. The do like a challenge when you see what comes into the workshop. This engine is pure race but the principles will be the same for a road car although the throttle bodies will be smaller say 42 or 45 rather than my 48.

The basic Weber DCOE inlet manifolds were used and fettled to match the bodies. ATpower (UK) supplied the throttle body kit specified by Damico it did come complete with the throttle linkage and trumpets, throttle position sensor and 440cc injectors. These throttle bodies do not have shafts on the butterfly so creating less turbulence which is one of the reasons I liked them also they were able to put a set together for the MGC which would require minimal work lol!

ECU came from Specialized components (UK), it is a Typhoon ECU has its own STX program which requires a CAN to USB dongle which then gives you access to the program and a engine log. The wiring loom was made up in house to suit the setup I have. Also being a six cylinder the injectors/coils take up two aux outputs annoying but! I do now have oil pressure, water temp logged along with a whole host of other ranges from times at different rpms engine hours all can be saved, even a live set of gauges for monitoring runs which can be recorded and saved.

On the engine we removed the distributer and machined a blank, welded in a temp sensor under the stat housing. Throttle position sensor. Fuel rail/return

We installed a extra crank case vent now the dizzy was out of the way and blanked the mechanical fuel pump vent off as this is a bit far down and could allow oil back up to the catch pot. A spin on KN filter which has a check valve to stop the oil from flowing out giving earlier oil to the engine, saving the pump from filling up nearly a litre before doing anymore work The trigger sensor and wheel were mounted on the ATI race damper, we could have made a new flywheel and mounted the trigger in the bell housing, but using a standard wheel the SC components sensor mount fitted a treat making for easy maintenance. One thing that may be a problem is that the engine does move about on the mounts and I had to move the radiator about 10mm further forward by drilling four new holes in the mounting brackets.

The fuel system The EFI setup requires two pumps a low pressure and High pressure , the original facet red top was fine a new HP pump and back pressure regulator set to 5 bar we bought along with a EFI rated filter unit and swirl pot. These have been mounted where the second 6v battery used to be, a return fuel line has been plumbed inside the car from the engine bay back to a new second connection on the original tank. The LP pump fills the swirl pot and the HP sends fuel to the rail at the end of the rail a line goes to the regulator which holds the pressure in the line at 5 bar (72.5psi).

On the track the rev range is 4500 to 7000 and the injection is a vast improvement on the webers. On the road slightly better manners but still from standstill it takes a bit of getting off the line without lots of revs or dipping the clutch. I think a road setup car would be a joy to drive with a matched cam to give more low down power, all in all its been expensive as the development work has taken its toll.

All parts are available or send us ideas for your engine and we can advise you.
Its not a cheap fix for a poor base engine your driving style and what you want long term from your investment is the overriding point. have something you don't need and you will not enjoy.

If your interested in the Injection system in my car I would be please to show or if your about on one of my track days your welcome for a ride.

Darren at Damico Race engines who look after my engines put together a package from AT power and SC components which has delivered a 44hp increase over webers on the same engine and dyno.

One other car was done with a unknown engine (modified or not) and Jenvy throttle bodies but was not an easy setup and performance was 170hp.

Pick up for trigger wheel which is attached to a ATI race damper. 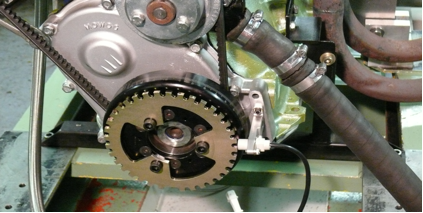 Pressure regulator close to rail, this is on the return side .